A while back Sven came to visit and we wandered around the Trafalgar Sq area looking for some place for dinner. I had an inexplicable urge to eat some Mexican food and not wanting to endure the 90 minute wait at Wahaca we head for the Texas Embassy Cantina. I was very dubious of a place that I had not even heard of but am willing to give most things a try at least once. 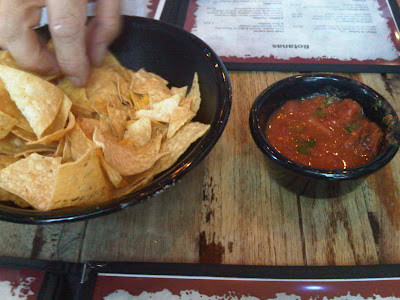 We were given some complimentary nachos and salsa whilst we perused the menu, the tortillas were good, slightly warm, just the right amount of salt and very crisp. The salsa was a tad runny and lacking heat, I like quite a kick in a tomato salsa.

I chose a chicken and guacamole salad realising that the standard of food here was nowhere near to Wahaca and was severely disappointed with what was delivered. Looking back it was unwise to order a salad in such an establishment, what arrived was a mess. I'm all for messy looking Mexican food but I have a thing about plates of this colour, feels like I'm 10 again and having dinner at my mates house. 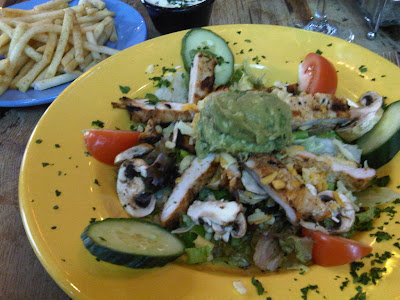 The chicken was cold and the kind that bares the hallmarks of having been pre cooked, with regulation charred marks on it, black bits basically that taste of nothing, it was dry and unappealing. As was the salad as a whole, there was a ranch dressing on the side which I opted to instead dunk my side of fries into rather than dousing the leaves in it. There were peppers and mushrooms (all raw), sweetcorn, tomato and cucumber. The only saving grace was a large dollop of guacamole on top but this introduced a mere variation of texture, it was virtually tasteless. 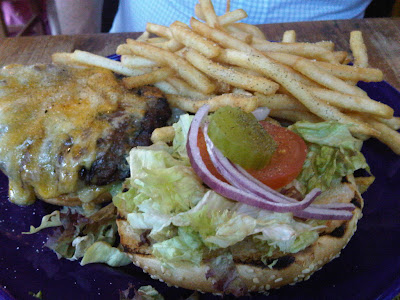 Sven ordered the burger with fries and was far happier with his selection than I. We were in agreement that the fries were good, the burger had all the essentials, red onion, cheese, loads of lettuce and a slice of tomato. Sven was pleased with it in any case but I didn't try it.

The service was reasonable, food arrived very promptly and there were rather a lot of people there. Mostly young and American. There's a bar area upstairs where they were showing some sport, I think it's probably best avoided and I can only see myself returning for a drink perhaps, though I can think of a hundred places I would check out first. If you do go, stick to the more traditional options on the menu, there's arguably less room for error with fajitas, burritos etc.

I had to go to a work function here last year and was dreading it as I'd heard bad things about the food but it wasn't too bad. I had a steak and while it wasn't the best steak in the world, it was definitely OK.

I think you're right about the safe choices and I completely agree about the hideous plates too!

My work always has dire venues for work functions. I get so jealous of my friends who work for bigger companies and have summer parties and the like, in fancy venues.

Steak would have been a wise choice, good call.

I used to fool my more naive friends who were visiting London into believing that Texas (the state) actually had its own embassy in London, showing them this restaurant from afar - as it sort of looks like an official building from very far away. I never liked the look of it - reminds me of ghastly TexMex chains from the US - so have never tried. I guess I wasn't too surprised by your review. Don't think I'll visit unless I have to...

I've been to this place, and it's truly awful. I live in Texas, although am not a "Texan," and I'm not sure that most people here would be ok with having the state's name on this place. The flavors just aren't right, it's almost too sweet. Basic "Tex-Mex" is not complicated to cook, so I'm not sure why they have so many problems.

I have heard that it's the only place in London to get a Michelob Ultra Light or something, so if you're an American ex-pat who has a hankering...