Dinner at The Providores Tapa Room last week holds a special place in my heart, Thomas' final exam day, an unplanned celebratory post pub meal to mark the end of a very tough period of time and the beginning of a hopefully calmer and happier phase of life.

Twice in 2 weeks I've seen my favourite white wine, Cloudy Bay, on a menu, first at The Warrington and again here at Providores but yet again it was priced out of the realm of possibility for the occasion, here it's £72 a bottle. I almost cried and ordered a large glass of the far more reasonably priced house white which was fine.

As for the food, I've been keen to eat here for some time to see if somewhere might give Barrafina or Del Parc a run for their money in terms of eating tapas in London. I return to these places time and time again and am never disappointed. I felt that Providores certainly hold their own and offer a perhaps more adventurous and playful approach to dining. Ingredients and flavours combining to dazzle and challenge the diner rather than presenting fresh and superbly sourced foods in a more traditional way. These approaches are equally worthy I feel and choosing between them in future will depend on mood and appetite at the time (with a predilection to pick Del Parc perhaps because it's about 10 seconds away from our front door!). 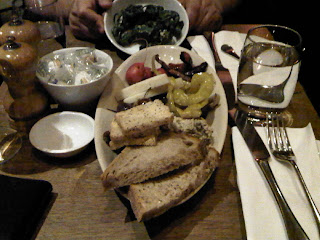 This was good, a mish mash of flavours and textures, it came with some bread and crackers. The chorizo was the crowning glory of the plate, disappointingly little of it sadly but what was there was amazing. Other highlights were the citrusy babaganoush, this was great on the crackers and the order of Pimientos de Padron with a generous sprinkling of sea salt. We got some of these from Brindisa at Borough Market and made them ourselves this weekend, they're so delicious and easy and we got a huge bagful for just £3.

We were sitting on a fairly teeny table for 2 and when the next dishes came there was barely room, so we had to swiftly bid farewell to the (unfinished) platter in order to accommodate the sweet potato and feta tortilla. This was Thomas' favourite dish, I was less keen for the most part because I thought it was too cold. I think this would be best served at room temperature, also several of the advertised key ingredients were missing. 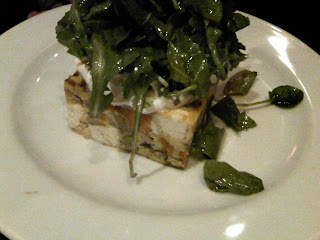 There was no sign of the edamame and the cheese on top of the tortilla was certainly not feta, more like mozzarella. Looking at the picture now, that might be feta in the tortilla but it didn't taste like it and I love feta so that was a shame. Still, this was quite pleasant, very dense and packed full of flavour, the sweet potato was perhaps the nicest component and the yogurt made for an interesting texture contrast.

We also tried the bruschetta topped with red onion and watercress salad. Initially this was very pleasing, (more of the) oozing stringy mozzarella with tangy cherry tomatoes which were bursting with flavour on a large piece of toasted sourdough. Not that any of this can be seen in the picture, interesting presentation, salad hiding the actual dish! 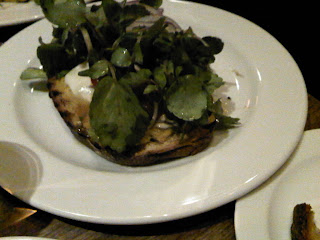 As time wore on the bread became more and more soggy, I know the idea is to have the juices of the tomatoes moisten the toast but this became very stodgy and heavy and the bread completely lost it's crunch.

The highlight of the meal for me was the Yellowfin tuna with beets and horseradish salsa. This had been delicately charred around the edges, it must have barely touched the pan yet it managed to retain a distinct grilled flavour, I loved its incredibly soft, almost melting texture and the horseradish and beets combined brilliantly making each mouthful leave you wanting more. 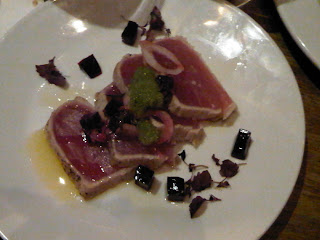 The meal came to around £70, not cheap considering Thomas didn't drink (just tap water) but I think we probably ordered a bit too much food for the 2 of us, it not actually fitting on the table and all! I liked most of what we had, decent produce cooked in an exciting way, particularly the tuna and I'd like to return, I hear the breakfast is particularly good so I'll probably revisit and try that out.

I thought it was quite overpriced to be honest, and whilst the food looked quite posh both on the menu and on the plates it actually tasted just "interesting" without really doing much for me emotionally.
It is a bit pretentious, particularly the tuna in my opinion was an example of where by adding - god knows what - to a perfectly delicious slice of fish you actually take away so much more than you add.

Its an okay place with some nice ideas and the food is above standard, but its far behind many other tapas places that are almost half the price.

But then again, I am always so negative & critical ....

The accompanying bits with the tuna are precisely what made it "interesting" I thought. Maybe breakfast would change your mind? Negative and critical? No!

I've not been here yet but I can say one thing for sure, they would have a fight on their hands if they tried to take away an unfinished plate from my table! They can bring a chair to put it on if they like but they ain't taking it until I've finished!

Hahaha, yes...I neglected to mention that Thomas scraped off as much as he could fit onto his side plate but the waiter sort of stared at us blankly as if to say "what are you gonna do about this fatties, you've ordered too much food?" The table was too small really. I hate being squished in.

I've been wanting to go to the Providores for a while now, especially for breakfast. Like Helen said though, if they wanted to take away an unfinished plate they'd have to prise it from my cold, dead hands.

Yeah I'm still keen to try out breakfast, ideally at a larger table!

I think you'll like the breakfast, as @Browners and I went a couple of months ago and had a great meal. Were you downstairs in the Tapa Room, as opposed to The Providores on the first floor? It sounds like it...

Yes, we ate downstairs, that explains it I suppose. I need to eat more breakfasts, wish I worked/lived closer and could pop in before work!